He was naked and unconscious on the floor at the foot of his bed at 421 Broome Street in SoHo, Manhattan

Heath Ledger, only months after filming his role as the Joker in The Dark Knight, was found at 3:31 in the afternoon by his masseuse and housekeeper. . There were prescription and nonprescription pills scattered all about yet there was no note. He was only 28 and by 6:30 PM, city workers rolled Heath’s body, enclosed in a black body bag, out of the building. Authorities did not suspect a crime but the big question was whether it was accidental or a suicide.

What killed Heath Ledger? On February 6, 2008, the Office of the Chief Medical Examiner of New York released its conclusions. The report concludes, “Mr. Heath Ledger died as the result of acute intoxication by the combined effects of oxycodone, hydrocodone, diazepam, temazepam, alprazolam and doxylamine.” It states definitively: “We have concluded that the manner of death is accident, resulting from the abuse of prescription medications.” [themedicalbag.]

Heath’s death was also a tragedy because now every random chick that he had a one night stand with thinks that she was his last great love. Let’s take Lindsay Lohan – LL has forced this postmortem connection to Heath for several years now. Evidence suggests that Heath and Lindsay did know each other in the months before his death. 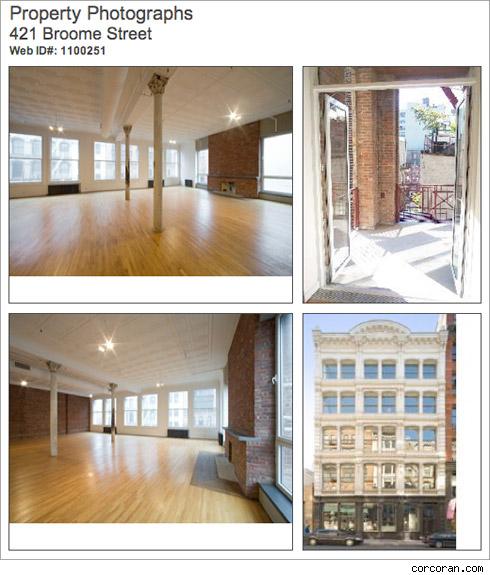 Built in 1873, New York’s Broom Street building has housed a variety of tenants that include the New York City Board of Education, a wire manufacturer, a typewriter company, and an art gallery. It was finally turned into a rental building in 2004 where Brokeback Mountain and Dark Knight star, Heath Ledger, lived and called home until his death in January 2008 from an accidental overdose.

Ledger lived in a 4,400-sq ft loft unit on the 4th floor, for which he paid around $25,000/month. The building was purchased for $15 million by investor Donald Burns in a foreclosure auction last year and has since gained two floors and been gut-renovated into four full-floor apartments. Now known as the 419-421 Broom St condominium, the units range in price from $3.9 million to a $20 million penthouse.

Ledger lived in an apartment identical to the 3-bedroom loft space currently on the third floor. The space hit the market a few days ago with an asking price of $5 million. According to the listing information, the 4,400-sq ft unit features 14.5-ft ceilings, a 76-sq ft private balcony, original Corinthian cast-iron columns, and exposed brick walls.[zillowblog]