Ten years ago Room 524 in the Ritz-Carlton hotel in the well-heeled Sydney suburb of Double Bay was booked in the name of Mr Murray River.

That booking and the events that took place in that room in the early hours of Saturday, November 22, 1997, proved that even the world’s most organised and luxurious hotels have moments they cannot control.

That night also proved that there’s nothing like a bit of global scandal to help put your hotel on the map and ensure everlasting fame.

Despite suffering the headaches, the press clamouring at the door, and the vice squad detectives in cheap suits camped out in the lobby for a week or two, almost every hotel that undergoes a big scandal becomes an overnight success.

Their names are on everybody’s lips, and their pictures and logos are everywhere.

The managers and staff at the Ritz-Carlton in Double Bay had more than your average cleaning job on their hands in Room 524 that day in November, 1997. They had a body to remove, and a very famous one at that.

Mr Murray River was none other than the rock god Michael Hutchence. The front man for INXS, Australia’s most successful band, was dead

The property changed hands in 2000 when the Singapore-based Stamford chain took over and the building was renamed the Stamford Plaza. But the stars kept coming. During the filming of Mission Impossible II at Sydney’s Fox Studios, the hotel was a temporary home for Tom Cruise. Add Madonna and Keanu Reeves to the mix (in separate rooms, thank you) and it is easy to see how the hotel’s celebrity reputation has survived.

The Stamford Plaza showed off its clientele with signed photographs and letters hanging in frames on the walls of the Winston bar. Tucked away in the cigar room, next to the humidor and its racks of Cubans, was a small gold frame containing a photograph of Hutchence on stage wearing a sleeveless denim jacket, and a little plaque as a mark of respect. [via news.com.au]

The Sunday Telegraph has uncovered a dark and mysterious underground world operating out of Double Bay’s $110 million Stamford Plaza since it closed three years ago.

Until the Cross St hotel closed in March 2009 it was a favourite of the rich and powerful – Kylie Minogue, John Travolta, George Bush Senior all loved the grandeur.

The hotel is managed by New Zealander David Churchill, a live-in “security consultant”, who sleeps in the presidential suite with his dog Lilly.

According to Double Bay sources Mr Churchill, who runs Churchill Security, has been renting the hotel’s rooms to a mixture of students, vagrants and prostitutes for about $250 per week. The price excludes cleaning services, linen or any kitchen facilities.

The Sunday Telegraph has learned female sex workers have been ushering in customers through a side-door.

Retailers reported a string of sleazy incidents at the hotel, including naked dancers gyrating against each other on balconies while men sat by and smoked, and “women who were definitely not Double Bay women” coming and going after dark. [couriermail.com.au] 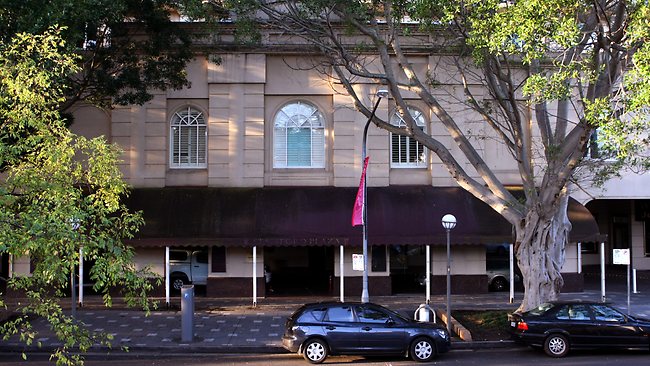